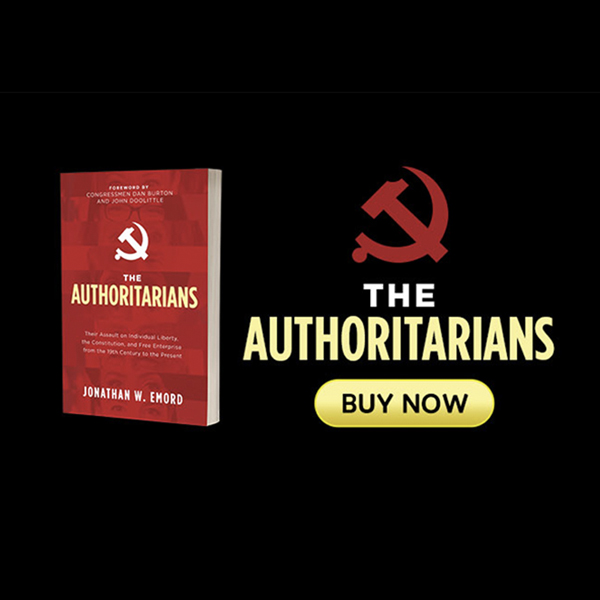 Visit Authoritarians.info to learn more about Jonathan Emord’s book, The Authoritarians (Morgan James Publishing Co., February 2021), and to sign up to receive a link for more information.

Praise for The Authoritarians

“Jonathan Emord’s The Authoritarians is a valuable contribution to literature dealing with the forces behind, and the dangers of, the socialist resurgence.”

—Ron Paul, former US Congressman and Host of the Ron Paul Liberty Report

“Jonathan Emord is a warrior out to save our rights. In The Authoritarians, he has done just that. Now if our leaders will read it and follow through . . . we just might make it.”

—George Noory, Host of Coast to Coast AM

“Jonathan Emord’s The Authoritarians is like Thomas Paine’s Common Sense but for our age.  It’s the book that will spark a rebirth of liberty and save the Republic.”

“The passionate and knowledgeable writing found in these pages is the perfect—and necessary—antidote to the sniveling, condescending, and yes, dangerous machinations of this nation’s far-gone Left, whose legions of autocratic Democrats, Antifa and BLM rioters, delusional media members, and misguided educators seek to replace our great Republic with their own perverted version of Marxist reality. These authoritarians seek to enslave us all through the false narrative of, among other things, inherent white privilege and racism. This threat to our individual liberty, as the recent election shows, is not some distant pipe dream of the progressive movement’s new revolutionaries. It is real and it is here. Jonathan Emord explains in great detail how and why this has occurred and, most importantly, how to reverse this tragic course of history before it’s too late.”

“The Authoritarians, from title to breathtakingly well-researched last page, offers an astonishing and eye-opening look at the many issues Americans must confront in order to stay free. Jonathan Emord does an admirable job of weaving together historical truths with modern day news to show readers the sad, raw reality—that yes, communism could indeed come to America. Like Paul Revere atop his horse—like John the Baptist crying from the wilderness—The Authoritarians is America’s twelfth hour call to arms. This is a great book to put in the schools to teach America’s emerging leaders the horrors of unfree states. They’ll be frightened enough to grab hold of the Constitution tight and keep our country on a path of limited government for decades to come.”

“The Authoritarians answers the question: How did we stray so far from the high ideals of the Founding Fathers and Framers of the Constitution? What if teetering on the edge of becoming a socialist nation was not an accident, but the deliberate effort of a progressivist agenda begun well over 100 years ago? The history not taught but revealed by Jonathan Emord’s meticulous research provides a critical road map to recovery for a nation founded on the principles of defense of life, liberty and property. How do we stop progressives who would abolish rights endowed by our Creator and replace them with privileges from authoritarian collectivists? Read this book. Before it’s too late.”

“[The Authoritarians] ought to be must-reading for anyone who loves freedom . . . [Jonathan Emord] is, in our opinion, an intellectual warrior for the rights and freedoms of people in America and around the world.”

—Congressmen Dan Burton and John T. Doolittle, as written in the Foreword

“In The Authoritarians, the socialists have met their match.  Just when they thought they captured America and could break out the cognac and caviar comes Jonathan Emord to ruin the party.”

“Will we defeat the socialist resurgence in America?  Of course we will, and how we will is spelled out in detail in Jonathan Emord’s instant classic, The Authoritarians.”

“Buy one copy for yourself and one for every other person you know and will come to know.  This is the essential intellectual retort to every socialist idea.”