Buy “The Rise of Tyranny,”
by Jonathan Emord 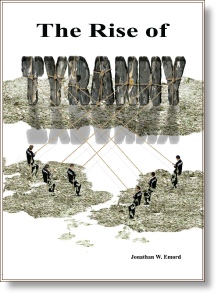 Since 1935 the Congress of the United States has delegated vast legislative, executive, and judicial powers to the Federal Agencies. The Founding Fathers predicted that if ever those constitutional powers were vested in single hands that would be the death of liberty and the birth of tyranny.

In this insightful book veteran constitutional and administrative attorney Jonathan W. Emord explains that the Founders’ dire prediction has come true. Three quarters of all federal laws are now the product not of our elected representatives but appointed agency heads. Largely unaccountable to the courts, the Congress, the President, and the American people, those officials repeatedly use their governing power to protect the economic interests of favored industry leaders at the expense of new market entrants and the American people. By doing so, they secure lucrative post government employment for themselves at the expense of Americans’ lives, liberties, and property. Emord blames Congress for avoiding responsibility for making tough choices, leaving those decisions to the faceless and insulated bureaucracy. He explains that this mass delegation of power has replaced the Constitutional Republic the Founders gave us with a bureaucratic oligarchy they condemned as tyrannical. Unelected and unaccountable but possessed of all power, the agency heads invariably govern corruptly, just as the Founders predicted. Emord offers America specific solutions to these problems, including two bills that he has written for Congress and that have already been introduced, the Congressional Responsibility and Accountability Act and the Health Freedom Protection Act. This is a book for the ages. It explains why our government is broken, who’s to blame, and how it can be fixed.