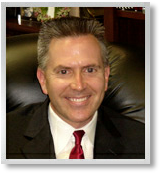 Jonathan W. Emord was born on January 16, 1961 in Brockton, Massachusetts. He has been practicing constitutional and administrative law before the federal courts and agencies since 1985. Having begun his career as an attorney in the Federal Communications Commission during the administration of President Ronald Reagan, Emord has maintained an abiding conviction to achieve full First Amendment protection for the freedoms of speech and press. In 1991, he authored the critically acclaimed Freedom, Technology, and the First Amendment in which he chronicled the intellectual foundations of the First Amendment and advocated replacing government control over the airwaves with a title registry, private property rights approach. Emord has practiced law for a number of well-respected firms, including Wiley, Rein & Fielding, and served as a Cato Institute Vice-President.

He practices constitutional law, food and drug law, deceptive advertising law, administrative law, libel law, and unfair competition law.  He served as lead counsel in the Pearson v. Shalala (D.C. Cir. 1999); Pearson v. Shalala (D.D.C. 2001); Pearson v. Thompson (D.D.C. 2001); Whitaker v. Thompson (D.D.C. 2002); Alliance for Natural Health v. Sebelius (D.D.C. 2010) and Alliance for Natural Health v. Sebelius (D.D.C. 2011) cases, holding FDA censorship of nutrient-disease relationship claims unconstitutional. He also served as lead counsel in Center for Science in the Public Interest et al. v. FDA (D.D.C. 2004); Nutraceutical Corp. v. Crawford (D.Ut. 2005); In re Novelty Distributors, DEA Docket No. 08-33 (May 21, 2008); Albion Intern., Inc. v. American Intern. Chemical, Inc., No. 2:07-cv-0994, 2012 WL 3776866 (D. Utah 2012); In re ECM BioFilms, Inc. d/b/a Enviroplastics International, FTC Dkt. 9358 (2013-2017); and Federal Trade Commission v. Lunada Biomedical, Inc., et al., No. CV-15-3380-MWF(PLA) (C.D. Cal. 2015).  Emord is admitted to practice in the states of Illinois, Virginia, and the District of Columbia. He is admitted to practice before the United States Supreme Court; the United States Courts of Appeal for the D.C., Fourth, Seventh, Ninth, Tenth, and Federal Circuits; the United States Court of International Trade; the United States Court of Federal Claims; and the United States District Courts for the District of Columbia, Eastern District of Virginia, Northern District of Illinois, and Western District of Wisconsin.  He is the only non-scientist member of the Board of Directors of the Board for the Certification of Nutrition Specialists.  In 2010, he became the first person awarded the title “Honorary Nutrition Specialist” by the CBNS.  He is a 1982 graduate (B.A., Political Science and History) of the University of Illinois where he was an Edmund J. James Scholar and a 1985 graduate (J.D.) of DePaul University.  He is routinely consulted by industry, Congress, and the media on regulatory issues that affect health freedom.  He is a Guest Lecturer at the Georgetown University, Department of Biochemistry, Course in Nutrition and at the Georgetown University Law Center, Alternative, Complementary, and Integrative Medicine Legal Issues Course.  Mr. Emord is the American Justice columnist for USA Today Magazine and co-host of the Sacred Fire of Liberty Hour on the Robert Scott Bell Show (Genesis Communications Network).  He has appeared as an expert commentator on the Fox Business Channel (Stossel); PBS; and numerous national radio programs, including fifteen appearances on Coast to Coast AM with George Noory.  He is on the Review Board of The Journal of Food Product Marketing and International Journal of Food & Agribusiness Marketing.

Jonathan Emord is a Top Rated Lawyer in the DC/Metro Area as rated by Martindale-Hubbell and ALM Media.

Numerous newspaper and magazine articles. In addition, the following monographs: